Zynga (NASDAQ:ZNGA), Moderna (NASDAQ:MRNA), and Tilray (NASDAQ:TLRY) are three high-flying growth stocks that have rallied by 64%, 658%, and 299%, respectively, in the past year alone. Returns like that top the S&P 500‘s 19% return over the same period, hands down.

With this bull market still in its early stages, many winners keep winning and many losers keep losing. Let's look at why now is just the right time to buy these three stocks — and why their momentum may be just beginning.

Last year, video game developer Zynga saw its revenue hit an all-time high of $1.97 billion, representing a 49% annual increase over 2019. At the same time, its operating cash flow improved by 63% to $429 million. Notable highlights of the year include the launch of Harry Potter: Puzzles and Spells, which received the Google Play 2020 Award for Best Casual Game. It also holds a rating of 4.7 on the Google Play and Android platforms. 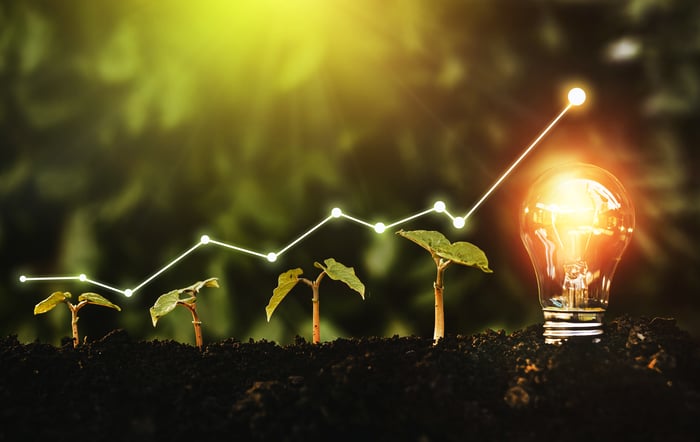 The company also acquired Peak (the maker of Toon Blast and Toy Blast) as well as Rollic, which has three of the top 50 most downloaded games in the U.S. on the iPhone. An estimated 36 million active users are playing one of Zynga's titles each day.

This year, Zynga expects to increase its sales further to $2.6 billion. Despite a remarkable 32% year-over-year revenue growth projection, the stock is only trading for 5 times sales. For investors who are looking for quality tech stocks at the right price, Zynga is your best bet.

Regulatory authorities worldwide are moving at a record pace to clear Moderna' mRNA-1273 coronavirus vaccine in hopes of bringing closure to the pandemic. More than 115 million doses of the vaccine have been ordered over the past 30 days, and Moderna expects to produce up to 1 billion doses of mRNA-1273 this year, with that number climbing to 1.2 billion by the end of 2022.

Based on advance purchase agreements, the company already has close to $12 billion worth of revenue in the bag for 2021. What's more, the vaccine appeared to retain its protection against the U.K. and South African mutant strains of SARS-CoV-2, as illustrated in a study. It previously showed 94% efficacy against the original strains of the coronavirus.

Right now, you can buy Moderna stock for just 7 times revenue, which is still cheaper than the biotech industry average of 8 times price-to-sales. And developing coronavirus vaccines isn't the company's only focus — Moderna could potentially generate up to $5 billion in annual peak sales if it can get its CMV vaccine to market. In addition, it has a whopping nine viral vaccines in its pipeline, along with 13 therapeutic candidates.

Canadian pot growers Aphria (NASDAQ:APHA) and Tilray are set to merge to become the largest producer of cannabis in the world, with combined revenue totaling CA$874 million over the trailing 12 months. After the deal closes, the combined company would have a near-complete pipeline of marijuana products, including flowers, pre-rolls, medical cannabis, oils, vapes, capsules, edibles, and beverages — the only category missing is pharmaceuticals.

Combined, the two giants rank No. 1 in the Canadian marijuana market, with a 17.3% stake. Aphria has robust medical marijuana sales coming from Germany, as well as beverage revenue from its U.S. subsidiary. Meanwhile, Tilray also has its own line of CBD operations down south.

In its latest earnings report (ended Nov. 30), Aphria grew its sales from CA$120.6 million in last year's quarter to CA$160.5 million. It is now breaking even, compared with a loss of CA$48.8 million during Q2 2020. Compared to the previous quarter, Aphria increased the amount of dried cannabis it sold by about 5,000 kilograms to 22,347 kg.

Given the solid turnaround in the Canadian legal weed market, Tilray stock is still up for grabs at 19 times forward sales. And the real crown jewel — its potential to enter the U.S. THC market in the face of looming federal decriminalization — is still to come.

Before you consider Zynga Inc., you'll want to hear about this new tech…

S.A.V. will change everything…. and make a lot of people rich:

But it's what he's planning next that will shock everyone.

Click here to watch a demo and see it for yourself.