Which biotech companies will become the superstars of tomorrow and push your portfolio performance into the stratosphere? It's impossible to predict the future of the stock market with perfect precision, but we can identify companies with promise. One method of finding great stocks is to hunt down clinical stage companies with potential new treatment methods for diseases and ailments that affect large numbers of people.

Vaxart (NASDAQ:VXRT) is a vaccine company with a different method of treatment delivery and CRISPR Therapeutics (NASDAQ:CRSP) is a biotech in the burgeoning gene editing space. These companies' techniques could revolutionize current treatment and prevention methods. If Vaxart and CRISPR are able to bring one product — or more — to market in the coming years, it's likely that their revenues and stock prices will climb. (And you may get rich in the process.) 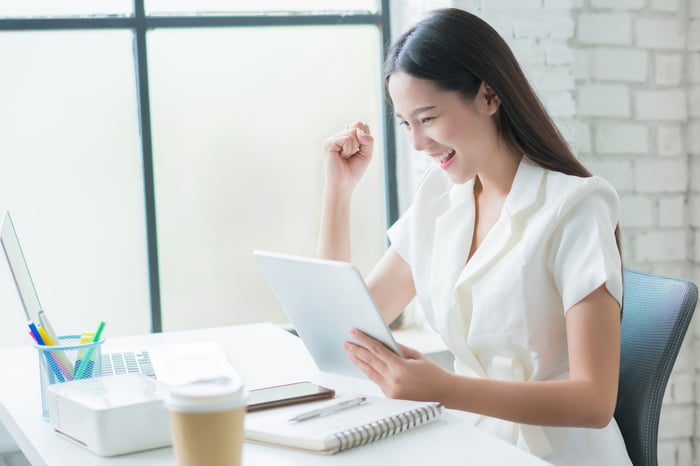 It's been difficult to miss Vaxart's name over the past several months. The company has earned most of its recent headlines for developing a potential vaccine against the novel coronavirus. Vaxart hopes to begin clinical trials for its vaccine candidate later this year, having filed an Investigational New Drug (IND) application on Aug. 10. An IND is a request made to the U.S. Food and Drug Administration (FDA) for permission to begin testing a treatment or vaccine on human subjects. Unfortunately for Vaxart, the race to a safe and effective vaccine is already pretty crowded. With 37 rival programs already in human testing and nine in phase 3 trials, it's unlikely that Vaxart's vaccine candidate will be the first to market.

But if clinical trials are successful, there is one big reason why Vaxart could eventually become a leader. Most of us aren't fans of needle jabs, right? Well, Vaxart has a friendly solution. The company's investigational vaccines are orally administered tablets, not injections. Manufacturing, transportation, and storage are easier to coordinate for tablets than they for injectables, because the tablets' contents remain stable at room temperature. This logistics factor could be a major advantage for Vaxart considering the need for a COVID-19 vaccine around the world and at a rapid pace.

Beyond its COVID-19 treatment candidate, Vaxart has five other programs in the pipeline. The most advanced are a norovirus vaccine, currently in phase 1 trials, and a seasonal flu vaccine, in phase 2. Earlier this year, Vaxart reported positive results from a flu vaccine challenge study involving a single flu strain. It showed higher reduction in infection rates than those seen after immunization with Sanofi‘s (NASDAQ:SNY) market-leader, Fluzone.

Vaxart's shares have tumbled 70% from the high reached in July. From this point, they would have to climb about 245% to reach analysts' lowest average 12-month price forecast. Regardless of Vaxart's future role in coronavirus prevention, if its biotechnology is successful in at least one oral vaccine program, the company could be on to something big.

CRISPR is a promising player in the gene editing space. Gene editing treats genetic diseases by “silencing” genes that cause ailments or introduces a new gene into the sequence. CRISPR's process involves an enzyme that cuts through DNA in order to inactivate a faulty gene, delete a certain sequence, or add a new gene. The gene editing market holds rich opportunities. At a compound annual growth rate (CAGR) of 17%, the market is forecasted to be worth more than $11 billion by 2025, up from about $5 billion this year, according to a Markets and Markets report.

CRISPR and its partner, Vertex Pharmaceuticals (NASDAQ:VRTX), have moved their investigational gene-editing therapy, CTX001, into phase 1/2 studies for two blood disorders: Transfusion-dependent beta thalassemia (TDT) and severe sickle cell disease (SCD). So far, data from the first two TDT patients and the first SCD patient were encouraging. The TDT patients were transfusion-independent five months and 15 months after treatment. The SCD patient was free of vaso-occlusive crises nine months post-treatment. In SCD, vaso-occlusive crises happen when sickle-shape red blood cells block small blood vessels, restricting the flow of oxygen to organs. The companies expect to report more results later this year. For both disease indications, the European Commission has granted CTX001 Orphan Drug designation and the FDA has assigned it Fast Track status. CRISPR also has three immuno-oncology programs in clinical trials and is in pre-trial research for five programs that include diabetes and other rare genetic disease treatments.

Though CRISPR doesn't have products on the market yet, research partnerships have helped the company generate revenue. Last year, total collaboration revenue soared to more than $289 million from $3.1 million in the year prior, mainly from work with Vertex. The company also has a favorable cash position. Cash and equivalents totaled more than $943 million at the end of the second quarter, the highest ever. CRISPR shares have more than doubled from their March low, but in the long term, they could go much higher if clinical trial results are positive.

All of this sounds great, but before investing in either Vaxart or CRISPR, proceed with caution. A biotech's ability to make investors rich largely depends on whether investigational products perform well in clinical trials and gain regulatory approval. Both of these biotech companies present the following risks:

That's why an investment in Vaxart or CRISPR is best left to aggressive investors with a higher tolerance for risk.

Related: Our #1 Biotech Stock For October