This two-month 30% selloff will have your mouth watering.

Approximately 60% of the world’s cocoa is produced from cacao trees in the Ivory Coast and Ghana. And thanks to favorable weather, those countries are expected to grow a whole lot of it this season.

In May, traders began to prepare for this bumper crop. Since then, the price of cocoa has been crushed.

And this two-month, 30% sell-off has my mouth watering. 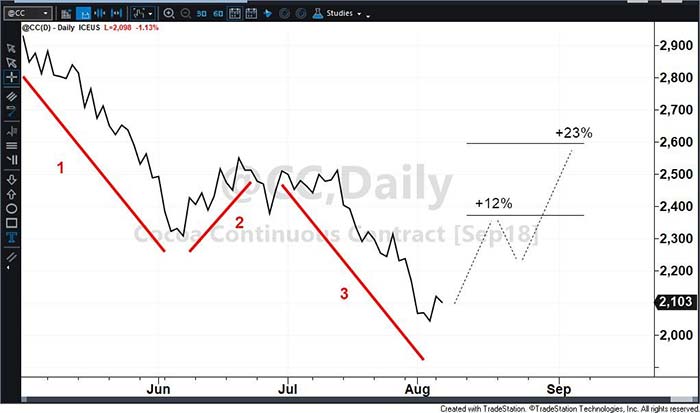 That’s a chart of cocoa futures. Look at the pattern of the downtrend. I’ve drawn it in red. One wave down, one wave up, one wave down.

The first wave began when the “smart money,” meaning investors with speedier access to new information, sold cocoa futures. Selling picked up speed, the bears took over and the bulls rushed for the exits.

Then, in June, the price of cocoa bounced. The second wave began because the bears got tired, second-guessed their bets and covered their trades.

The third wave began in July when the bears got a second wind. They returned, chased the bulls away and sent the price of cocoa reeling again.

Today, the price of cocoa is at an important level. Selling pressure is likely to become exhausted near $2,000 per ton, if it hasn’t already.

Cocoa is on sale.

This price will attract buyers. The price of cocoa could rise by 12% to 23% from its current price of $2,103 in the next six to eight weeks.

That’s a sweet double-digit gain. And you can get it without trading futures.

The iPath Bloomberg Cocoa Subindex Total Return ETN (NYSE: NIB) tracks the price of cocoa. An ETN is an exchange-traded note. It’s like a stock or an exchange-traded fund. And it’s a solid way to make double-digit returns in the next two months when cocoa bounces.