A week ago, Pfizer (NYSE:PFE) delivered great news about its vaccine progress. The company projects that it will be 90% effective and that’s way above expectations. This week, Moderna (NASDAQ:MRNA) announced that its vaccine also had more than 94% effectiveness in combatting the novel coronavirus. All is great for sentiment among the people and it translates into bids on Wall Street. The Dow Jones Industrial Average is nearing 30,000 already. These results even beat the vaccine for the traditional flu by a long mile. People are breathing a sigh of relief, so the actual vaccine cannot come fast enough for us. Investor reactions left us great stocks to buy while not many were looking.

The infection rates globally are rising at an alarming rate. In the U.S. we are adding over 100,000 new cases per day. There are offsetting factors like lower death rates and more tests. Nevertheless, it is still not a good situation to have going into a season know for increased sickness. The impact of this transmission increase could be a few weeks out. There is a delay between the new infections and the resulting deaths. Hopefully the therapeutics have improved to squash that too.

Today we will address a more positive aspect of the vaccine and that’s the impact it will have on stocks. We are examining stocks to buy that have significant upside from here.

During this pandemic, there are split investment themes. Some sectors died, new ones blossomed and some dead companies roared back to life. Then there are a few that flip-flop back and forth with trader sentiment. The three in question today are:

All three are stocks to buy for the long term and they are all low enough to also qualify as a swing trade. 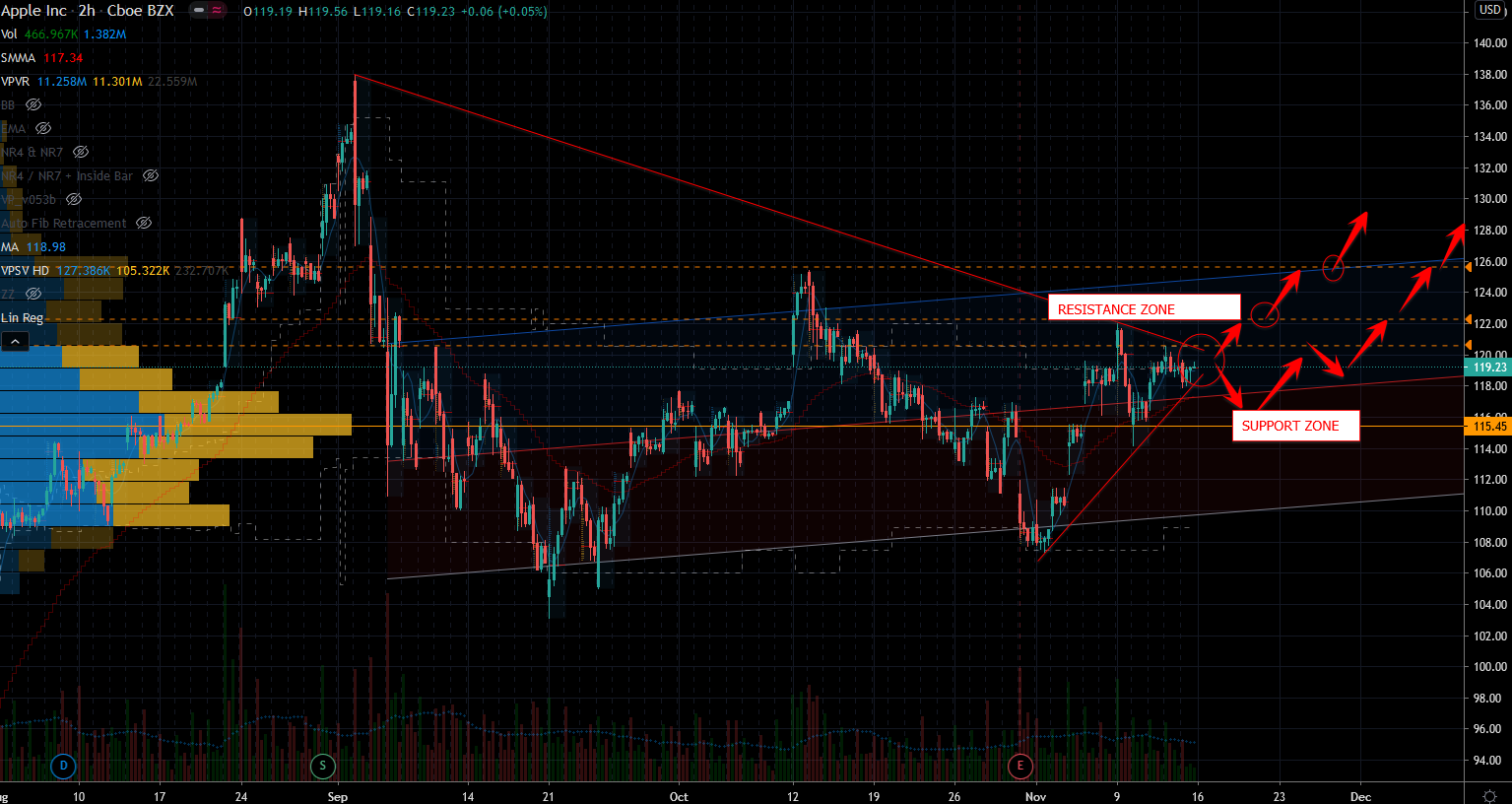 On the face of it, Apple stock does not belong in a write-up headline about fallen stocks. After all it’s up 60% year-to-date — twice more than the Nasdaq. The nuance is that it’s down 5%, but still 11% off the October highs. The interesting part about that is that the range is tightening and a new move is coming. The direction is still unknown, but the bulls are in charge so the presumption is a breakout.

The trend for the last few months is ascending. In November, AAPL stock is setting higher-lows and lower-highs and has recently hit a plateau. Since August it has traded sideways below the post-split level. Often those are resting periods so that the bulls can gather their momentum again. As long as prices stay above $114 per share for the next two weeks, odds are it is going to break out. The test will come when the buyers face $122 per share. Above that they will trigger bullish patterns that should target the all-time highs.

Keep in mind that those came under very strong markets and inside the storm of stock splits from it and Tesla (NASDAQ:TSLA). It won’t be easy and the burden is on the bulls to prove worthy. Those are conditions that are hard to replicate, but this has been a crazy year and stranger things have happened. The bottom line is that on its worst days, Apple is still a premier company. As long as the overall markets are rising it’s going to be in the leader pack. Expecting a crash for it alone is unreasonable. There are several layers of support below current prices and any dip into those are buying opportunities. AAPL is the raining king of stocks to buy on dips. 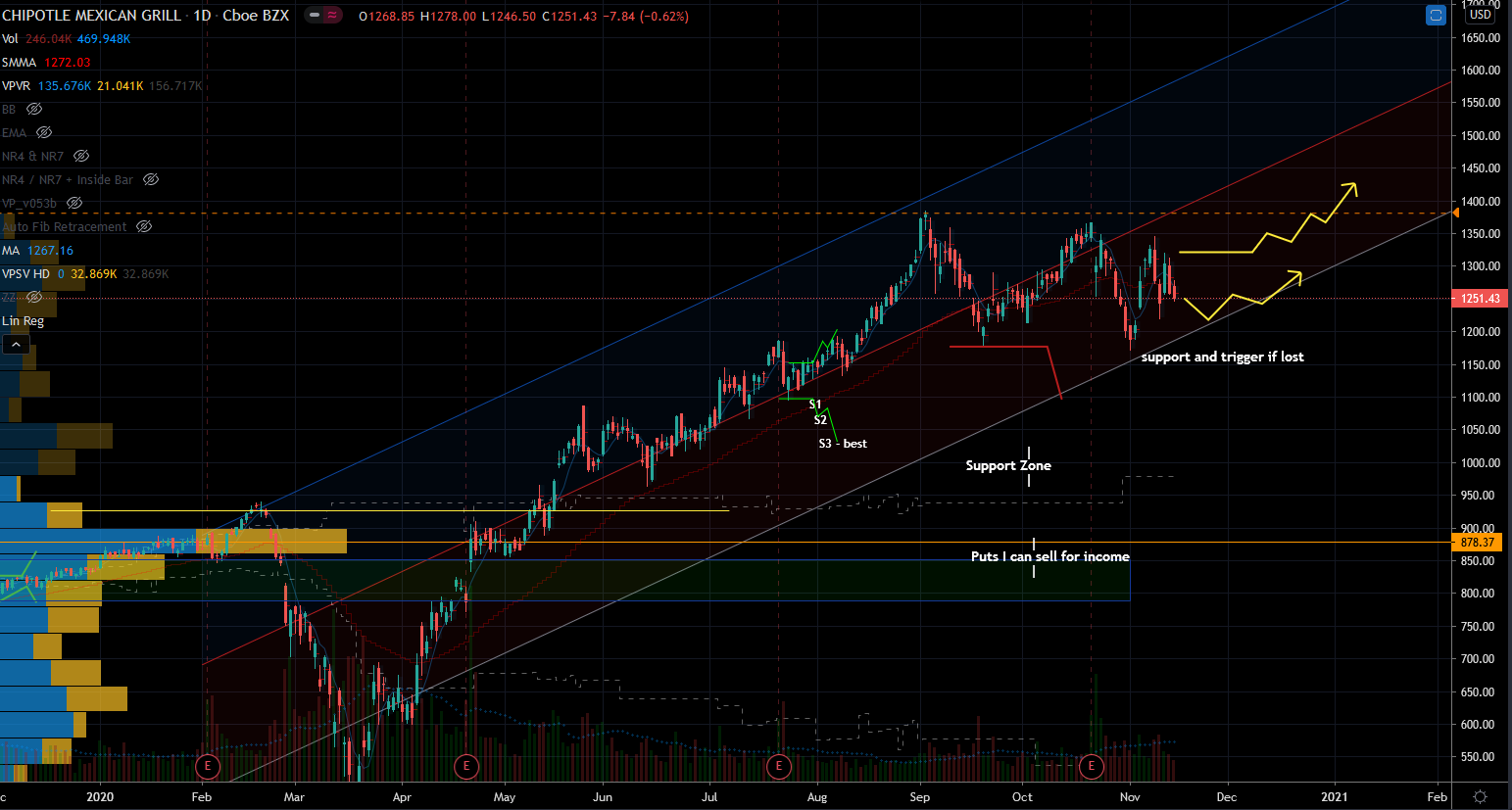 CMG stock is not for the faint of heart. For starters, it has a high price tag above $1,250 per share. Although it is not expensive from a fundamental perspective, it is a high ticket price. In addition, it is a fast mover, so you need to have a strong stomach on bad days. For the last two months it has been consolidating in a wide range between $1,165 and the all-time highs. The ping pong action inside of this will eventually result in a breakout from the edges. Since Wall Street is still bullish on stocks, so it only makes sense that the direction of CMG stock’s breakout would be up.

At $1,250 per share it’s sitting close to the middle between support and resistance. Any dip is an opportunity to buy for a swing trade. The upside potential for that could be +$150 per share. Thereafter and if the bulls are able to break through $1,360, they can rally into open air. It would not be surprising to see CMG stock at $1,500 by January. The swing trade could turn into an investment.

This is a sticky point for a lot of investors. They often confuse a high ticket face price of a stock with its value. In this case, even though CMG costs so much to buy, it is not expensive. The common mistake is to evaluate it based on its price-to-earnings ratio. Most investors refuse to accept that having a P/E of 150x is not a problem for stocks like this or Amazon (NASDAQ:AMZN) to pick another. These are extremely fast growers that need to spend a lot to deliver the growth.

The more important metric for valuation is their price-to-sales ratios and they are both cheap. Let’s compare McDonald’s (NYSE:MCD) which has a 32x P/E, which is five times cheaper than Chipotle. However its price-to-sales is 30% more expensive. Investors in MCD stock have more hopium built into the stock price today then Chipotle. To put it another way, Chipotle grew its sales 43%, since 2016, while McDonald’s shrank 14%. Most investors feel safe buying cheap valuations, but sometimes there’s a reason for that.

The team at Chipotle incredibly grew comparable sales (comps) during the shutdown. I’ve analyzed a lot of restaurants in my day and I’ve never seen many chains that can deliver comps like CMG. It is simply astonishing what they are able to do even facing the current headwinds. Some call it luck, and I emphatically challenge that because they made their own luck. Just like Amazon, they worked hard to put themselves in a situation where they can capitalize on this new environment. It’s like they saw this coming, so they optimized for more convenience and speed. This makes them stocks to buy on dips not the other way around. 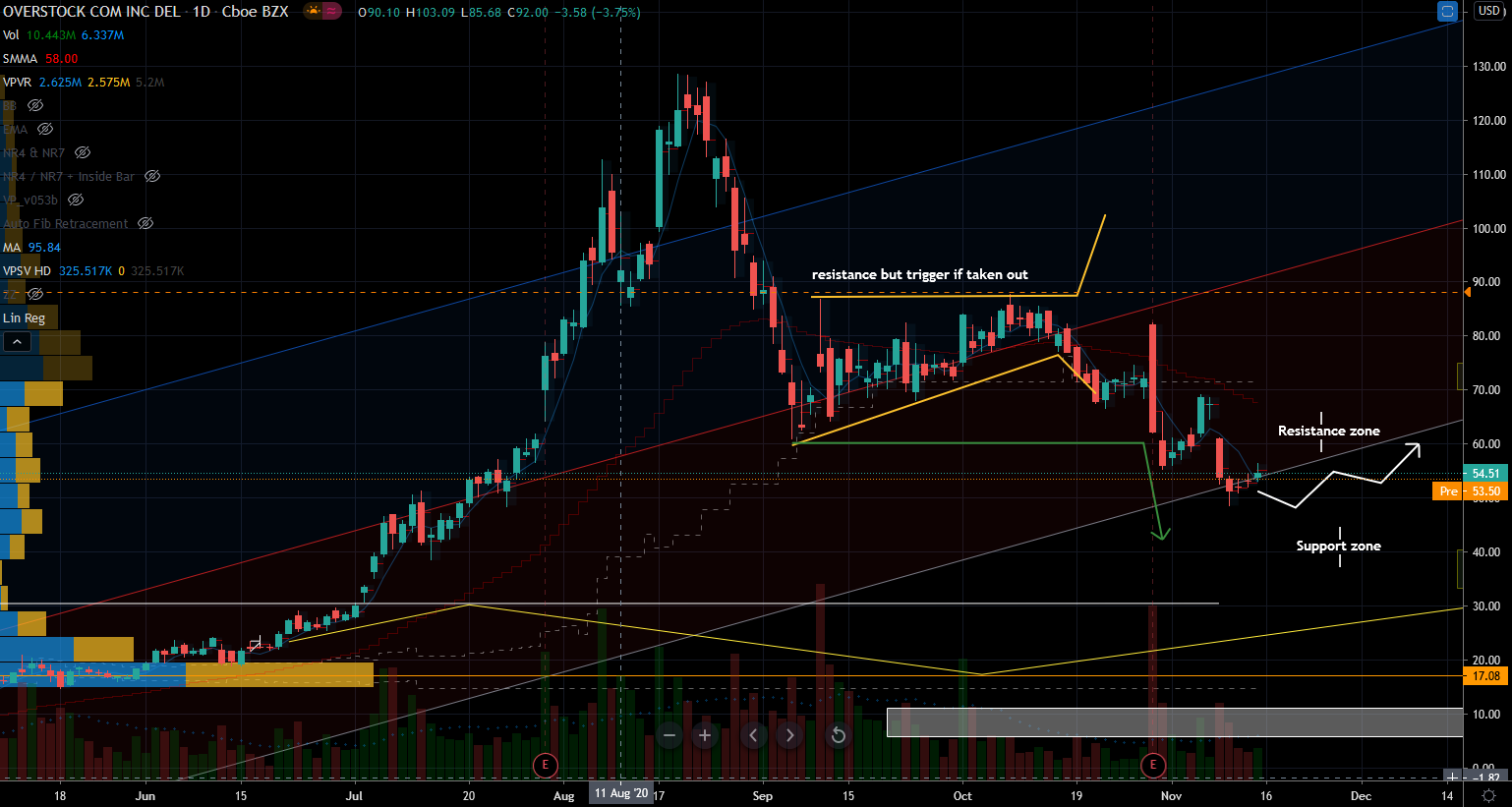 The pandemic was a human tragedy but it opened up a new world for a slew of industries. Overstock.com is one of those companies that benefited tremendously from social distancing. OSTK stock was under $3 just a few months ago. Here we are talking about buying the dip down to $53 per share. Momentum movers like this make for dangerous stocks to buy on the headlines. But where there is risk there is reward.

Incredibly it rallied 5,000% since March, so it’s hard to justify catching a falling knife so quickly. This could turn out to be a giant machete with a huge blade and a tiny handle. Meaning, it could be costly to investors if they are not careful with how they do it. This is where using the options markets can be beneficial. There, I can structure trades that limit the exposure and leverage the results.

Traditionally, a trader who buys 1,000 shares risks $53,000 right here right now. Instead, they can sell 10 of the January $35 puts and collect $2,000 for the trade. Both methods are bullish OSTK stock. Buying shares requires a rally to profit, selling the puts does not. In fact, the stock can fall 32% and the trade would yield its maximum profits. In essence, the trader collects a premium for the promise of buying shares cheaper. The downside is that they have limited profits.

In addition, investors can buy call spreads to participate with the upside with finite risk. Fundamentally, I see the bullish thesis for overstock and I see its upside potential into January. The holiday shopping season should be better than what people expect. And online retailers like this one are going to have a giant portion of it. I was lucky to catch the breakout from $26 per share earlier this year. I think a similar opportunity albeit at a smaller scale opportunity is presenting itself here. This is a calculated risk that’s worth taking, especially inside a bullish market.