Apple (NASDAQ:AAPL) had its minor moment in the media earlier this week as it presented more of its iPhones. The phones are finally catching up with bigger competitors such as Samsung Electronics (SSNLF,005930 Korea), Xiaomi (OTCMKTS:XIACY) and ZTE (OTCMKTS:ZTCOY) by containing transmission chips and software to operate on fifth-generation (5G) wireless standards. 5G is not really in the U.S. yet, but is increasingly in China and South Korea. But the company is at least trying to be relevant.

Behind the glass and painted cases of modern phones are a host of semiconductors that the company had little to do with in creating or producing. Like for most of Apple products, they do the marketing — others do the work.

But it is a good news peg to discuss the semiconductor chips that are so vital for the world’s electronic gadgets, as well as everything else from our cars to planes and even the refrigerator in your kitchen.

Everyone tends to focus on the big brand names in technology, not the companies that do the grunt work to make the guts of modern products. Hence companies like Apple get lots of headlines and companies that I am presenting to you include some that aren’t household names. They should be, though, if you are investing in more of the new-new things coming to the market.

Semiconductors, or chips, are firmly in the vernacular of technology investors. But I would argue that not many understand the process of getting from silicon to the finished product that makes a gadget work when you hit the power button.

Foundries are extremely capital-intensive facilities that come with all sorts of massive barriers to entry. They need lots of space and can be highly environmentally disruptive, both in construction as well as in operation. And permits from governments, from national to local entities, can be very, very difficult to get.

I remember many years ago in Shanghai, I was invited to an initial presentation by a coop led by Siemens (OTCMKTS:SIEGY) about a new fabrication plant that was getting built in south-central China. The project was supposed to get done in under a year — which seemed impossible anywhere beyond China.

They took a small mountain and leveled it, making a clear building site with access to transportation of raw materials and finished chips. And then they built and finished it all ahead of schedule and the plant is still humming along today.

This, of course, would never happen in the U.S. But that’s yet another great thing about China when it comes to business.

And China remains the go-to nation for foundries, along with some regional locations. And despite all of the bluster over competition – China and its regional partners are the go-to places for getting chips made from start to finish.

Here are some of the companies that I would have you take a look at if you are interested in investing in what’s behind the brands of electronics that make it all happen.

Samsung Electronics is a Korea-based behemoth that has a great relationship with China and the region when it comes to manufacturing just about everything electronic. It is one of the globe’s leaders in foundries for chips. That in turn feeds its own needs for its own high-value-added products as well as supplying others.

This company should be in any portfolio that wants to be exposed to the best of technology, including foundries. 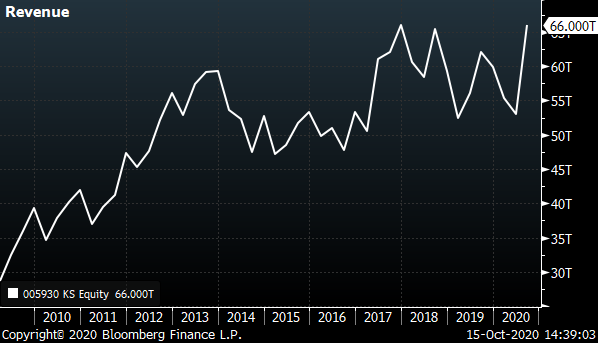 Revenue for the company continues to expand year after year with the past decade showing gains averaging 7.51% on a compound annual growth rate basis (CAGR). Of course, foundries are just one business — along with batteries (including processing all sorts of very nasty chemicals to make them happen) as well as countless finished industrial and consumer products.

But with nearly everything from soup to nuts in its operations, its operating margin is very impressive at 12.1%, demonstrating its cost controls and excellent management. This, in turn, drives an impressive return on shareholder’s equity of 7.5%.

Dividends are getting better, running at a yield of 2.4%. And with lots and lots of cash and pretty much no real debt, the company is the best to start with in the chip business.

The shares in U.S. dollars have been a consistent performer with the past decade alone generating a return of 354.81% for an average annual equivalent return of 16.34%. One thing to note — you may have to call your broker for execution, and this may or may not incur a fee.

Taiwan Semiconductor (TSM, 2330 Taipei) is a Chinese behemoth in the chips business headquartered in Hsinchu on the island of Formosa. Like for Samsung, Taiwan Semi provides a litany of chips and related products that generally are done under contract with a who’s-who in the electronics markets.

It has massive foundries throughout China and its territories and works well with governments in its plant and foundry developments. And it in turn generally controls one of the largest percentages of chips made in any given year for customers around the globe.

Revenue from its more focused product line on chips and components continues to rise. Over the past decades, the company has achieved revenue gains running at 12.56% on a CAGR basis. 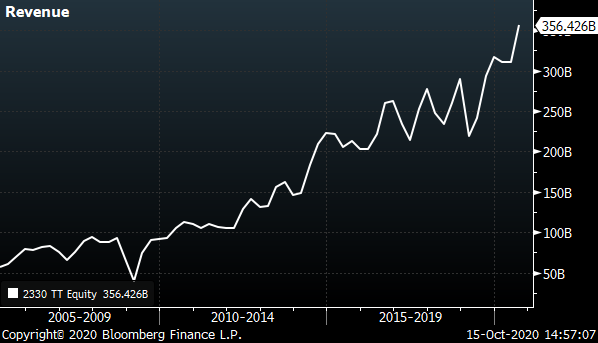 Its margin is much better than for the much more diverse Samsung, and is running currently at 34.8%.

And in turn, this drives a return on shareholder equity at a whopping 29.1%.

The shares have returned 989.02% over the trailing decade for an annual equivalent return of 26.95% including a dividend yield of 2.2%. And with lots of cash and little debt, the company is set to continue to expand as needed.

Semiconductor Manufacturing International Corporation (SMICY, 981 Hong Kong) is also known as SMIC. It, too, has some of the leading foundries in China and does a great job of running them from its headquarters in Shanghai.

Like for Taiwan Semi, SMIC does a lot of contract work — which makes for a broad play on chips and the overall demand for electronic goods. 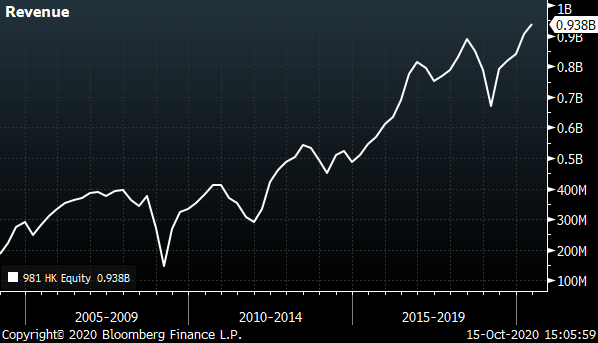 Revenue has a long-term history of steady growth, with the average running at 10.43% on a CAGR basis.

The company has a bit less cash on hand and a bit more debt — which can be more common for larger-scale Chinese companies. But at only 24.00% of assets, it is not an issue — nor should it limit growth, as it is well-supported by the government.

The stock has been plodding along for many years until the last two — but since then, it has returned 190.14%, for a quick average annual equivalent of 70.21%. It is also a cheaper stock like Samsung as its stock is valued at a low 2.07 times its intrinsic value (book).

No dividend yield, but it does make for a value buy in the foundry space.

United Microelectronics Corporation (UMC, 2303 Taipei) is more commonly known as UMC. And the company makes a variety of semiconductor chips and integrated circuit chips for a litany of companies, from consumer to industrials.

It has major Chinese foundries and assembly facilities, and since its founding back in 1980, it has continued to earn contracts year in and year out from customers around the world. 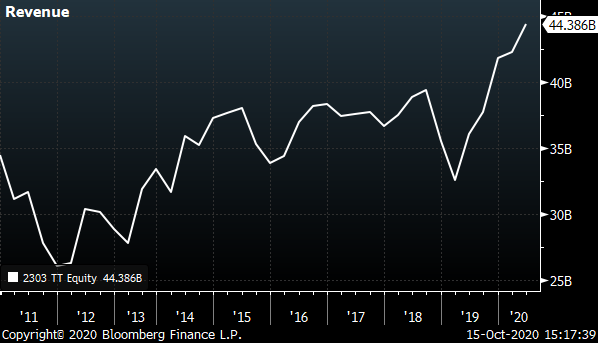 Revenue has been gaining at a bit more of a steady, if not subdued  level compared to its foundry peers. Gains average only at 2.71% on a CAGR basis.

And margins are tighter than for its cross-town rival Taiwan Semi at a more subdued level of 3.2%. But with more cash and controlled debt, the company is still a go-to maker with ample government support.

Shares have had a history of muted return until the past two years – but still have garnered some 250.39% for shareholders over the past five years.

And with a dividend yielding 2.50% and shares even cheaper at 1.83 times intrinsic value – closer to the absolute bargain of Samsung it does make for a value in the foundry market.

Bonus: 5G Surprise – Even Bigger Than my Extraordinary 20,130% Apple Trade?

HOLD ON!
I think of this 5G opportunity as the “new Apple”

If you joined me back when I first recommended Apple, you could have enjoyed an extraordinary 20,130% price explosion if you had held on over the years.

Now that 5G is ready for takeoff…

My research suggests we’re staring at an opportunity of this magnitude again — if not even greater.

It all hinges on this shiny device…

Go Straight to the Exciting Story

But I have compelling new evidence that this so-called “smart antenna” could become the #1 tech sensation of the decade!

Remember, I’m the guy with a knack for spotting the Next Big Thing — just look at these extraordinary examples our firm spotted…

This one could be the granddaddy of them all! Go HERE to see why.