Robinhood is in the news once again. The controversial commission-free stock trading and investing app is reportedly all set to go public. InvestorPlace Web Content Producer Sarah Smith wrote an insightful article regarding what we know so far about the planned 2021 initial public offering (IPO).

One thing we know for sure is that shares will skyrocket once they hit the Nasdaq. One of the stories that have dominated the investing world in the last year is the rise of Robinhood. Due to the novel coronavirus pandemic, millennial investors have found a lot of time on their hands and used their stimulus check to try and make some money on the stock market.

However, no one could have expected the combination of Robinhood, millennial investors, and Reddit would contribute to an investment trend few saw coming. Hedge funds got burned on their short positions due to huge squeezes in a slew of heavily shorted names.

Generally, though, analysts have advocated going against Robinhood stocks. Millennial investors usually go for a gut feel rather than focusing on fundamentals when they are making a decision. 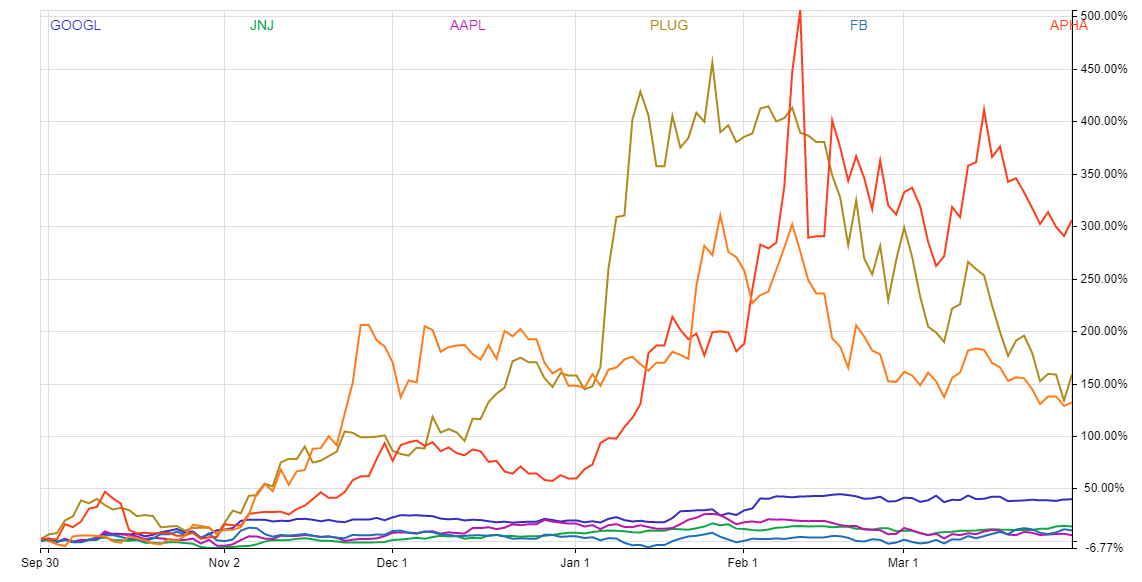 However, as the Form 13F filings with the Securities and Exchange Commission will show, several billionaires are pouring a lot of capital into certain Robinhood stocks. Hence, if you were hesitating to pull the trigger, you now have some more incentive to put your money into one of these vehicles.

It’s no surprises that GOOGL stock is a favorite for both hedge funds and the Robinhood crowd. There is literally nothing in our daily lives that don’t get affected by Alphabet’s products.

No one needs to talk up Google stock. The use of their products in our daily lives is immense. The pandemic only increased their usage. Hence, it’s no shocker that Robinhood users feel this is a great place to put their capital.

Hedge funds have also increased their investments in the internet giant in the last quarter. Daniel Loeb’s Third Point Management opened a 260,000-share stake in the Google parent. Ole Andreas Halvorsen’s Viking Global initiated a roughly 3% stake in the third quarter of 2020 and increased it by more than 427,000 shares in Q4 of 2020.

Being such a favorite among hedge funds doesn’t mean that there aren’t any risks. Google, along with other Big Tech giants, are always on Congress’s radar. However, the conglomerate has gotten so large that investors don’t mind stomaching regulatory challenges.

JNJ is mostly in the news these days because of its vaccine. Although the efficacy rate is the weakest among most of the major vaccines cleared for use, the pharmaceutical giant still stands to make a lot of money. In the last four quarters, Refinitiv data shows the American multinational corporation has beat analyst expectations repeatedly.

Covid-19 vaccines will be a short-term tailwind. Considering it’s the world’s largest and most diverse healthcare firm, the company will continue to do well regardless of the situation.

Its operations are divided into three main categories, pharmaceutical, medical devices and diagnostics, and consumer. The majority of revenues are derived from the sale of drug and device groups. Owing to its large size and diversified business holdings, it has been a consistent, stable business performer for several years.

Considering all this, it’s not surprising that hedge funds and Robinhood traders find JNJ interesting. The latter, in particular, likes to play trends, Covid-19 being the best of such examples. As of this writing, shares of the pharma giant are trading at 29.5x price to earnings.

Apple is a gift that keeps on giving. The world’s largest technology company has beaten expectations 11 times in the last 12 quarters. Looking forward, consensus analyst estimate tracked by Refinitiv shows revenues are expected to grow 21.5% and 26.7% in fiscal 2021 and 2022.

In its fiscal 2021 first quarter, Apple reported record revenue of $111.4 billion, up 21% from the year-ago period, and quarterly earnings per diluted share of $1.68, up 35%, and beating expectations by 19%. Operating cash flow came in at a record $38.8 billion, and the company returned over $30 billion during the quarter instead of reaching a net cash neutral position over time.

Due to such strong fundamentals, it’s no surprise that you’ll find AAPL in the portfolios of several prominent investors. Chief among them is CEO Warren Buffett. Nicknamed the “Oracle of Omaha,” Buffett is one of Apple’s biggest bulls, holding approximately 908 million Apple shares worth about $109 billion.

One of the major themes of the presidency of Joe Biden is clean energy. The President of the United States has made no bones about his ambitions to transform the country into a clean energy giant. As a result, several alternative energy stocks are doing extremely well in the current market. And hydrogen play PLUG is no different.

Recently, SK Group, the third-largest conglomerate in South Korea, poured $1.5 billion in Plug Power to increase its hydrogen footprint. The initiative is part of South Korea’s overall objective to achieve carbon neutrality by 2050. Separately, PLUG raised approximately $1 billion of capital. So, the company has attracted a lot of money to finance its operations within the last 12 months.

Along with peers Bloom Energy (NYSE:BE) and FuelCell Energy (NASDAQ:FCEL), the hydrogen fuel cell company dominates this renewable energy market section. Revenue has increased 36.4% in the last year, and looking ahead; sales are expected to rise 39.1% and 114.6%, per consensus estimates gathered by Refinitiv.

Although the stock is expensive, JP Morgan analyst Paul Coster has said PLUG is the “best in class.”

Facebook is one of several tech stocks that benefitted immensely from the pandemic. Considering the nature of the health crisis, people found themselves stuck at home, leading to a massive surge in Facebook and Instagram usage. In the final three months of last year, the social media giant posted EPS of $3.88 per share on revenues of $28.07 billion versus $3.22 per share and $26.44 billion forecasted by Refinitiv.

Although total monthly users in the U.S. and Canada fell sequentially, Facebook’s total user base across its main apps, Instagram, Messenger, and WhatsApp, grew to 3.30 billion monthly from 3.21 billion in the previous quarter.

Facebook reported other revenue of $885 million, which increased 156% from 2019. Although not a large section of the overall pie, it’s still a notable segment now because of Oculus virtual reality headsets sales and the Portal video-chatting devices. Due to strict stay-at-home instructions, usage and sales of these products increased immensely.

Stock Rover data shows that this is the third quarter that the American technology conglomerate beat expectations in a row. So, FB stock is also a favorite among hedge fund managers. Charles Payson “Chase” Coleman III, an American billionaire hedge fund manager and investor, is a long-term fan of the company. Coleman’s Tiger Global fund still holds over 6.3 million shares in FB stock. Shares are trading at 25.9 times forward price-to-earnings.

Much like alternative energy, marijuana stocks are enjoying a bit of a renaissance now that President Joe Biden is in office. Former President Donald Trump had a tougher stance on federal legalization. As a result, in the run-up to his inauguration, cannabis stocks surged to great heights. Granted, the enthusiasm has tapered off a bit. Federal legalization is not a straightforward affair. And there are several battles that still need to be fought in Congress.

Hedge fund activity is on the rise, though. And it will continue to be that way for the foreseeable future, considering the mega-merger between Aphria and Tilray (NASDAQ:TLRY). During the fourth quarter, David Siegel and John Overdeck’s Two Sigma Investments initiated a position of 3.35 million shares in APHA. Due to the merger arbitrage opportunity, investors and hedge funds will continue to open new positions as the stock price rises in the run-up to the combination.

Once that takes place, shares will cool off. Robinhood traders are also hip to this trend. That’s why marijuana stocks like APHA often make it onto their stocks to buy lists.

Our final pick is a bit controversial. PLTR stock has generated a lot of headlines, and a majority of them are not about its operations. The big data analytics founded by Peter Thiel has a close relationship with the U.S. military and the Immigration and Customs Enforcement (ICE). It doesn’t sit well with several members of Congress.

However, purely from an investment point of view, it gives the company access to smooth, recurring cash flows. Plus, strong links with the nation’s military establishment is something that every defense contractor wants.

Since debuting via direct listing, shares have been on a tear. Considering its client list, I am not astonished why this is so. Hedge funds also agree with this sentiment. Daniel Loeb’s Third Point, Steven Cohen’s Point72 Asset Management, and Anchorage Capital Group have all acquired stakes in the company last year.

Weiss Ratings has just issued its findings on the unintended consequences of a new Federal Reserve policy.

According to the agency's researchers, this policy is forcing investors into a corner. Whether they know it or not.

And… “closing all other avenues of opportunity.”

Most investors are not aware of what this will mean for their investments.

The fallout could be devastating for some and enriching for others.

If you own shares of any U.S. stocks…

It's critical that you find out what is about to happen.

P.S. No matter who's in the White House. No matter what happens in the economy. This new Fed policy is what will drive the markets for years to come. Find out how it will impact your investments here…