Aside from the coronavirus-fueled market meltdown earlier this year, the stock market has performed quite well during Donald Trump's four years in office. It performed even better during the eight years that Joe Biden was vice president in the Obama administration. Since 1950, stocks have delivered solid gains on average regardless of which party's candidate sits in the White House.

The truth is that neither the reelection of Trump nor the election of Biden will likely cause the stock market to plunge. But that doesn't mean the possibility doesn't exist for a major downturn on the horizon. Here's the election scenario most likely to cause a stock market crash. 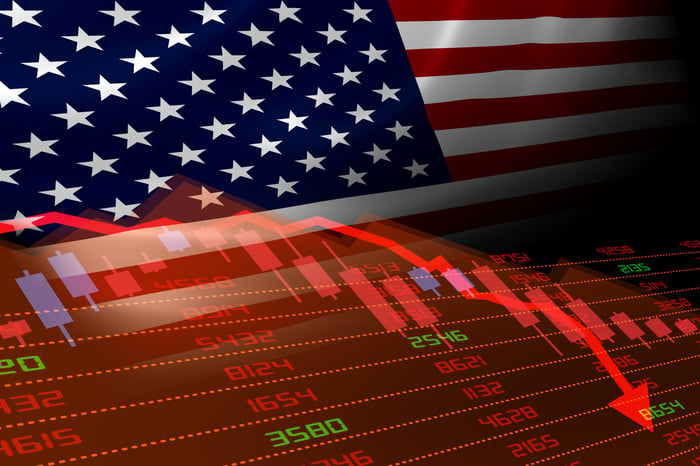 The most dreaded outcome of all

Wall Street absolutely abhors uncertainty. Therefore, the election outcome that would almost certainly cause stocks to sink is the one that gives the least amount of certainty for the U.S.

The obvious scenario is if there's no clear winner in the presidential race. Investors definitely don't want a repeat of 2000 where presidential election disputes ultimately had to be decided by the U.S. Supreme Court.

Believe it or not, though, there's a potential way for things to shake out that would be even worse than the 2000 fiasco. Imagine that the results in at least one battleground state are in dispute — and the final vote including the disputed state(s) could cause a tie in the Electoral College.

If we really wanted to add to the chaos, throw in a situation where disputed results in one or more states also put the control of the U.S. Senate in question. With this level of political uncertainty, it's easy to see how stocks could nose-dive.

How it could happen

Could this situation actually occur in the real world? It's certainly unlikely. However, it's also quite possible.

An unclear outcome in any of several big states with lots of electoral votes could put the presidential election in doubt. Pennsylvania, for example, could be the state that decides who occupies the White House for the next four years.

Let's suppose that the election results in Pennsylvania are disputed. Also, assume that President Trump holds on to most of the states that he won in 2016. Importantly, put current toss-up states Florida, Georgia, Iowa, North Carolina, Ohio, and Texas in Trump's column. Let's also stipulate that Trump wins the single electoral votes in the toss-up districts in Maine and Nebraska.

Now, suppose that Joe Biden holds on to most of the states that Hillary Clinton won in 2016. In addition, assume he picks up Arizona, Michigan, and Wisconsin (all states that Trump won four years ago).

For what it's worth, one sports betting site recently put the odds of such a tie at nearly 50-to-1. Those were roughly the same odds for Mine That Bird winning the Kentucky Derby in 2009 (and in case you don't follow horse racing, Mine That Bird did exactly that).

What about control of the Senate? Disputed results in one or two key toss-up races could easily cause uncertainty about which party will hold a majority next year.

Investors really don't need to change anything about their current strategy even if this improbable (yet still plausible) scenario occurs. Any uncertainty would eventually be resolved. Stocks might fall, but they'd also likely rebound relatively quickly.

But if you like to prepare for the worst, there is a potential investing strategy that you could follow yet still remain invested in stocks. There are three kinds of stocks that should be good picks during times of heightened uncertainty:

Dollar General (NYSE:DG) is a great example of a stock of a company that sells must-have products. The discount retailer's sales soared earlier this year as Americans stocked up on staple goods during the pandemic lockdowns. Dollar General is a good safe-haven stock for nearly any kind of uncertain period. And with its aggressive expansion plans to open new stores, the stock should provide solid returns during less-tumultuous times as well.

Brookfield Renewable (NYSE:BEP) (NYSE:BEPC) is a renewable energy stock with 95% of its total power generation contracted out and a weighted-average remaining contract length of 15 years. The company's cash flows should remain very stable over the long term. With demand for renewable energy rising, Brookfield Renewable should enjoy solid growth regardless of which party is in power in Washington, D.C.

Moderna (NASDAQ:MRNA) is a biotech stock whose fortunes hinge on the success of its coronavirus vaccine and not on what happens with the elections. The company expects to get the first look at late-stage clinical data for its vaccine candidate mRNA-1273 this month. If all goes well, Moderna could file for Emergency Use Authorization in the U.S. by late November. Even if there's still uncertainty about who will be the next president or control the Senate at that point, the stock will almost certainly soar on good news for mRNA-1273.