The deployment of 5G wireless networks in 2020 hasn't yet been hampered by the coronavirus pandemic. According to third-party estimates, 5G connections in the first quarter of 2020 shot up 308% quarter over quarter to 63.6 million as more than 100 smartphone models supporting the latest wireless technology have already hit the market.

What's more, over 200 commercial 5G networks are expected to be in operation by the end of the year, compared to just 82 a couple of months ago. Not surprisingly, tech companies that stand to gain from the deployment of 5G networks have been flying high in 2020, beating the broader market by huge margins. Skyworks Solutions (NASDAQ:SWKS), Marvell Technology (NASDAQ:MRVL), and Ciena (NYSE:CIEN) are three such hot stocks that have delivered impressive returns so far this year and look good for more.

So Skyworks' products will play a critical role in helping 5G smartphones connect to the network, and this opens a big opportunity for the chipmaker for two reasons. First, 5G smartphones are expected to use more wireless content from chipmakers such as Skyworks, thanks to an increase in complexity. 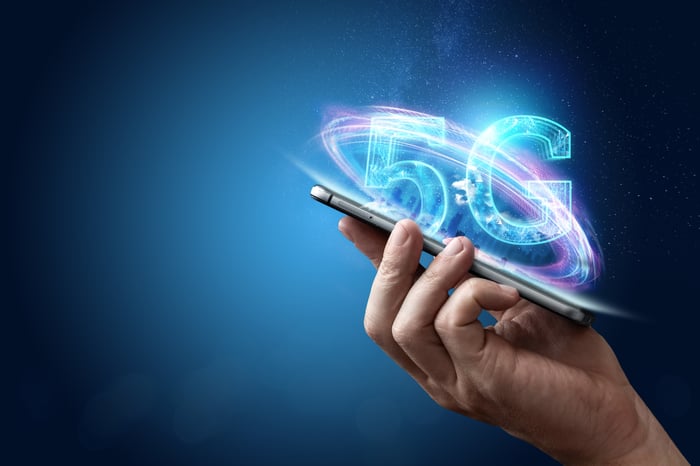 Skyworks CEO Liam Griffin estimates that the company's revenue opportunity in a 5G handset could be double or triple that of 4G devices. He pointed this out on the latest earnings conference call, “So you could be looking at platforms that in a 4G world maybe offered $4 to $5 for us; in a 5G world, it could be $8 to $10, or even $15.”

The second reason Skyworks can win big from 5G smartphones is a spurt in volume. Skyworks peer Qorvo estimates that 250 million smartphones could be shipped in 2020. That number could go up to 1.5 billion annually by 2025, according to third-party forecasts. So, Skyworks Solutions' mobile business could get better and drive overall revenue growth as the segment accounts for 69% of its total revenue.

Infrastructure deployment will be a tailwind for Marvell Technology

Marvell Technology gets 57% of its total revenue from the networking business, which recorded 15% annual growth last quarter thanks to the build-out of 5G networks in China. The company is supplying 5G content to two customers that together account for half of the country's recently issued 5G network contracts.

Additionally, Marvell's 5G partnership with Samsung should start bearing fruit soon. The two companies struck a partnership last year under which Marvell will provide its 5G infrastructure platform to Samsung to enable the rollout of a next-generation wireless network.

Marvell recently said that it has started shipping its 5G solutions to Samsung for deployment in South Korea, Japan, and the U.S. Marvell is also developing a custom baseband solution for Nokia that could go into production later in 2020. In all, Marvell says that its solutions are designed into the latest generation of 5G base stations across several telecom providers.

This could be a big deal for Marvell in the long run, as spending on 5G infrastructure (including base stations) is expected to grow at an annual rate of 29% through 2026, according one estimate.

Moreover, the 5G rollout should also have a positive impact on Marvell's storage business, which accounts for 37% of total revenue. Demand for the company's solid-state drive (SSD) controllers increased last quarter and the trend should continue in the future. IDC estimates that the SSD industry's revenue could increase at a compound annual growth rate of 18% through 2024.

Data centers are expected to play a crucial role in the SSD market's growth. That's because the jump in data transfer speeds brought about by 5G networks will lead to an increase in the volume of data created, spawning the need for higher capacity in data centers and creating another opportunity for Marvell to boost revenue.

Fifth-generation (5G) wireless networks are going to be much faster than 4G networks. In theory, 5G is expected to deliver 8 to 16 times faster average speeds than 4G networks, along with a fivefold jump in bandwidth and a sharp reduction in latency. Achieving those performance levels would require an upgrade in optical transport, which is good news for Ciena as it controls close to a quarter of the optical hardware networking market worldwide (excluding China).

The company is sitting on a multibillion-dollar revenue opportunity, as the optical network transport market that was worth just over $23.6 billion in 2019 is expected to hit $56 billion in revenue by 2025, according to Mordor Intelligence. That translates into a compound annual growth rate of 15.4%, indicating that Ciena could ramp up the modest pace of revenue growth it is currently clocking.

In the fiscal quarter that ended May 2, the company's revenue increased 3.4% year over year. So don't be surprised to see Ciena step on the gas in the forthcoming quarters since we are still in the early stages of 5G deployment. Only 8% of global telecom networks are expected to be covered by 5G this year, according to GSMA Intelligence. The coverage could go up to 34% by 2025.

The stock is currently trading at a relatively attractive valuation with a trailing price-to-earnings ratio of 29, which is much lower than the 5-year average multiple of 55. With Ciena's earnings growth expected to pick up the pace in the coming years , it would be a good idea to keep holding this hot 5G stock.