Shares of Tesla (NASDAQ:TSLA) took a hit on Tuesday, extending a sharp decline that occurred on Monday. The growth stock fell as much as 11.3% at its worst point during the trading day. But as of 10:45 a.m. EST, the stock is down 5.7%.

While it's unclear exactly why shares are down on Tuesday, it may simply represent extended downward momentum from yesterday's decline. In addition, the stock may be taking a breather after an epic run-up last month. 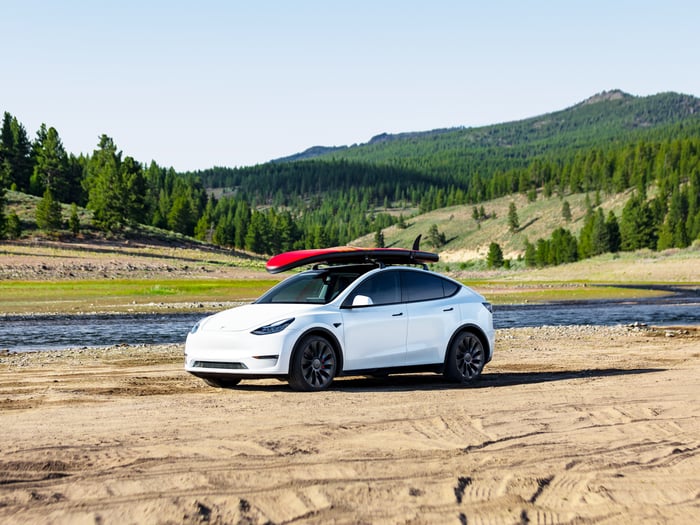 A sharp pullback in Tesla's stock price yesterday was likely driven by news that the electric car maker's founder and CEO, Elon Musk, may be selling 10% of his stock. Based on what he said on Twitter about the sale, it would help him pay taxes and ensure he doesn't look like he's trying to avoid paying taxes with unrealized gains.

He put the proposed sale up to a vote on Twitter, noting that he would abide by the results of the poll. Well over half of the respondents said Musk should sell 10% of his stock.

The stock's sell-off today may be a continuation of the bearishness that dominated Tesla shares yesterday.

Volatility in Tesla stock could persist in the coming weeks. Shares of the automaker rose an incredible 44% in October. The sharp gain in such a short period of time may mean that some investors are skittish in November, and potentially looking to take some profits. After all, Tesla stock now has an extremely pricy valuation. Shares trade at more than 350 times earnings.

Going forward, Tesla will need to execute its growth plans with near-flawless precision in order to grow into its sky-high valuation. Of course, management does have high hopes for the company's future, guiding for deliveries to average a 50% annualized growth rate over a multi-year horizon.

Only 2% of cars sold in the U.S. today are electric vehicles…

But that’s about to change — FAST.

One startup’s new technology is poised to disrupt the $2 trillion car industry.

Its light, inexpensive, powerful and quick-charging “Forever Battery” could be the tipping point that finally makes EVs affordable for everyday Americans.

In fact, a Wall Street legend predicts it will cause a 1,500% surge in EV sales over the next 4 years.

An early-stage investment in this startup could deliver life-changing profits.

What is this secretive battery tech company?

Get the inside details here.