It's no small feat for a stock to double within a year. After all, the average annual gain for the S&P 500 is only around 10%. Beating that return tenfold is an impressive achievement. But to double in two consecutive years goes beyond impressive.

There probably aren't very many stocks that will pull this feat off in 2020 and 2021. However, there are three growth stocks that doubled (and a whole lot more) this year that I think have a very good chance of doing it again in the new year. 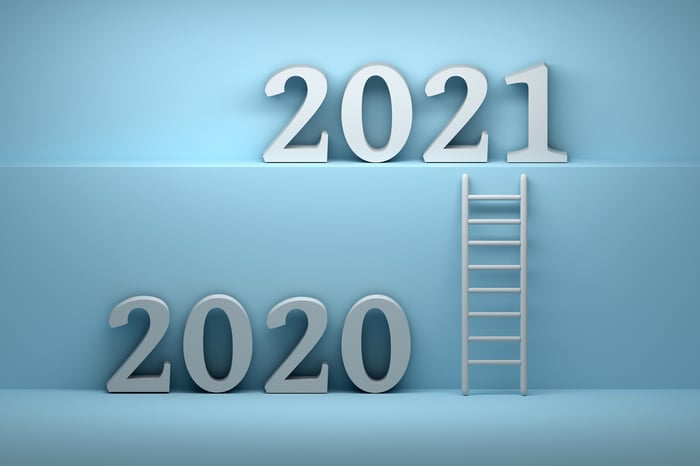 Etsy‘s (NASDAQ:ETSY) shares have skyrocketed more than 320% year to date. You can thank COVID-19 for this remarkable rise. The pandemic fueled a surge in online buying, which turbocharged sales for the e-commerce platform for handcrafted products.

Some might worry that Etsy will have a hard time duplicating its success in 2021. I'm not. My view is that the pandemic has opened up a much larger customer base for Etsy. I think these customers will keep on turning to the e-commerce site for unique gifts that aren't available in most stores.

Equally important, Etsy makes it easy for sellers to do business on its platform. The company's sign-up process is simple. Its commissions are low. Etsy's policies should attract more merchants of handcrafted products, which in turn is likely to draw even more customers to its site.

What about competition, especially from e-commerce giant Amazon? I agree with my Motley Fool colleague Jason Hall that Etsy is basically Amazon-proof. Despite its great performance this year, Etsy's market cap is still under $25 billion. I think there's plenty of runway for Etsy to double again.

Fastly (NYSE:FSLY) gave itself a very appropriate name (even though “fastly” isn't a real adverb). The tech stock has quintupled in 2020 so far. As was the case with Etsy, the pandemic served as the big catalyst for Fastly. The surge in e-commerce traffic caused organizations to turn to Fastly's edge computing platform and content delivery networks (CDNs) — both of which boost the speed for internet end users.

Sure, there have been some wild swings along the way. After rising more than 540% year to date by mid-October, Fastly's shares plunged 50% due to uncertainty about whether or not its biggest customer, TikTok, would be able to continue serving the U.S. market.

My hunch is that the incoming Biden administration won't try to punish Chinese companies as the Trump White House has. That should alleviate worries for Fastly about its TikTok revenue evaporating. I don't think the demand for faster internet content delivery will dry up at all. And I anticipate that Fastly's recent acquisition of web security company Signal Sciences will pay off.

I fully realize that Fastly's valuation is at a nosebleed level with shares trading at more than 40 times sales. But the company is still small with a market cap below $12 billion. And its market opportunity remains really big. It won't surprise me if Fastly defies expectations and soars 100% or more again next year.

Innovative Industrial Properties (NYSE:IIPR) ranked as the top-performing real estate investment trust (REIT) stock in 2020. It wasn't a close competition, by the way. IIP's shares have soared close to 150%, around 50% more than the No. 2 REIT stock.

I think that IIP might have the easiest path to doubling again in 2021 of the three stocks on our list. All the company has to do is to continue buying and leasing additional properties. This will increase IIP's earnings, which will in turn drive its stock higher.

Finding more properties probably won't be very difficult. Thirty-five states have legalized medical cannabis, with several of those markets only in their early stages. IIP currently owns properties in less than half of these states. With its excellent growth prospects and attractive dividend, this REIT could be a huge winner for investors next year.

Have you seen this new 5G Weapon yet?

Scientists are calling it an “entirely new type of weapon.”

They say it's virtually “impossible to defend against.”

The Pentagon says building these new 5G Weapons is their “#1 Priority.”

Just 40 days after Trump signed the bill, the Army said of these new 5G Weapons, “We're going to make a lot of them very quickly.”

And at the center of this “unstoppable” weapon is a small company.

It's only a fraction of the size of the biggest defense contractors like Lockheed Martin, Boeing and Raytheon.

But it beat out all of those company to become to the first to manufacture these new weapons for the United States.